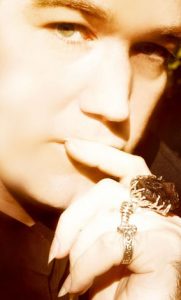 John J. Coughlin, often considered the “Father of Dark Paganism,” has been a practitioner of the Occult Arts since the mid-1980’s. In that time he has worked with several groups, although he primarily prefers to walk a solitary, eclectic path. Also associated with the Gothic scene, John has incorporated his personal aesthetics and ideals into his spirituality giving him an often unique perspective.

Preferring to consider himself an “obscure occult author” due to his distaste for self promotion, John believes those who will benefit from his work will eventually stumble across it when the time is right. Professional writers are cursed with having to sacrifice their integrity to please the majority in order to sell their work to the masses. John does not seek to make a living off his writing and is therefore free to write about what he finds interesting and important regardless of its trendiness or political correctness. Much of John’s work remains in private distribution within the various magical groups with which he works.

John is also webmaster of waningmoon.com which is the mother site for his various (mostly dated) web projects geared primarily to Gothic and Pagan audiences including the now-retired Gothic, Pagan and Vampire personals. John was also founder and editor of the NYC Pagan Resource Guide which served the New York tri-state area for 15 years between 1996 – 2011. He enjoys promoting a sense of community through his websites.

As a rogue scholar of sorts, John Coughlin has been researching the history and evolution of Wiccan ethics in order to show how the religion’s perception of ethics has developed since its inception and to promote true scholarly research into the Craft’s history.

Currently John’s focus is on independent publishing via Waning Moon Publications and on various projects geared toward bringing the ideals of self-development and personal initiation to a wider audience by finding ways to present esoteric ideals and techniques without the trappings of occult imagery and jargon which can often become distractions and blinders.

Besides his occult-related studies, John is an avid hiker. His hobbies include martial arts, learning piano, cooking, and the Japanese language (he is close to N4 certification level).

Permission to reprint for educational purposes at no cost is hereby granted to all provided the text is not altered in any way and proper credit is given to the author.